Only a decade ago, the idea of consuming probiotics to treat diseases would have elicited a curious stare.

Gut bacteria were still an obscure and poorly understood subject. Most doctors focused almost all their attention on the eradication of dangerous microbes rather than the study of beneficial ones, and gut bacteria rarely lived outside of the human body’s delicate ecosystem anyway.

But as scientists have recently discovered, these bacteria may hold certain important clues to human health. The microbial composition of the gut seems to play a significant role in many common diseases, including obesity, heart disease, and inflammatory bowel disease.

The study of gut bacteria holds the promise that a new cure or treatment might be discovered. The health market has already been flooded with dubious probiotics that make grandiose promises about the incredible benefits of their products.

They try to sell the alluring idea that the complex pathologies affecting the human body can be reduced to a single all-encompassing cause: the mysterious behavior of single-celled organisms.

However, the connection between microbes and human host is not that simple. The sheer diversity and range of gut bacteria make studying them incredibly complicated.

According to The Economist, a typical adult human harbors approximately 100 trillion bacteria just in the gut alone. Microbes outnumber our own cells nearly 10 to one. All that microbial life inside the human body is collectively known as the microbiome. 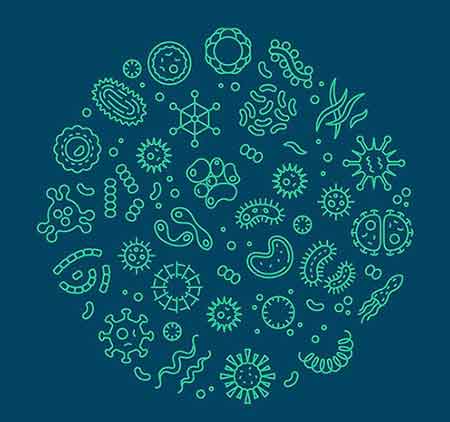 Each person’s microbiome is estimated to contain approximately two million unique microbial genes, beside which our own meager 20,000 or 25,000 genes pale in comparison. You can think of the microbiome as an entirely separate organ, with its own functions and systems.

Most of us may go through life never realizing it, but the fate of gut bacteria and humans are intertwined in a symbiotic relationship. Microbes play an integral role in digestion and health. In exchange, the human host provides food and shelter for the microbes.

Relationship Between Microbes and Humans

The symbiotic relationship between microbe and human host is not a biological necessity or an iron rule; instead, it’s an unlikely accident of history. Over millions of years, animals and microbes evolved side-by-side in a close, mutual relationship, so that each benefited from the activity of the other.

The human body now depends on microbes for basic functions we normally take for granted. For instance, immediately after we’re born, our digestive systems are still developing; we rely on microbes to help us digest certain kinds of complex carbohydrates found in our mother’s milk that we otherwise could not break down. When we are adults, microbes help us store fat, produce vitamins, break down food, balance glucose levels in the blood, and regulate various hormones.

When it is functioning properly, the microbiome harbors a rich and diverse community of microbes. When it is misbehaving, the microbiome starts to look very different. Illness is more common in people who have the wrong set of bacteria or when the interests of the microbes and host do not align.

The microbes in a lean person, for example, are different from the microbes in an obese person. That is an extraordinary fact. It means that doctors might possibly treat an illness just by transplanting useful microbes into the gut.

Perhaps most intriguing of all, the health of the human mind appears to overlap and coincide with the diversity and composition of the microbiome. That might seem counterintuitive, but in fact, there’s a strong connection between the neurological system and the gut.

About 70 percent of the neurons outside of the brain reside within the intestines. Certain microbes in the gut produce neurotransmitters such as serotonin and dopamine. These chemicals facilitate communication between neurons and regulate mood. Scientists have even found that imbalances in neurotransmitter production are associated with anxiety and depression.

A study recently published in the journal Cell found a relationship between obesity, social behavior, and the microbiome, at least in mice. The scientists tested a hypothesis that overweight mothers with abnormal gut bacteria give birth to offspring that have trouble socializing. The study pointed to some kind of correlation between missing gut bacteria and under-developed social skills.

Amazingly enough, the subjects started interacting normally once exposed to the proper gut bacteria. Some researchers have even hypothesized that people with autism are missing certain gut bacteria. About 75 percent of autism patients have gastrointestinal problems such as food allergies or gluten sensitivity, perhaps pointing to some kind of relationship between the microbiome and mental health.

Other studies have found that changes in gut bacteria might also worsen the symptoms of Parkinson’s disease.

Does that mean probiotics could be used to treat these medical conditions? Unfortunately, even if researchers do find a connection between microbes and certain diseases, there’s not a lot of compelling evidence that something like yogurt or probiotics will really help much.

Most of these products touting the benefits of consuming microbes are of dubious quality. Probiotics are regulated as supplements, so they’re not exactly subjected to strict quality control measures by the FDA. And even if they were, it’s unlikely that eating yogurt or taking probiotics will significantly alter your health.

The microbiome is like a complex and sophisticated machine, and most probiotics are too poorly targeted to make much of a difference.

Nevertheless, if scientists could ever determine which strains of bacteria are associated with certain diseases, then it’s at least theoretically possible to isolate those microbes and transplant them into a person.

When antibiotics kill off too many beneficial gut bacteria, for instance, a transplant can restore the normal balance of the microbiome. One day it might be possible to alleviate certain symptoms by changing the composition of microbes in the gut. However, our understanding of the microbiome is still in its early stages, and it may take many years to untangle the complex relationship between the microbiome and human health.