The calcium contained in cows’ milk cannot truly aid the development of any other being, except its own calf.

Since adult cows do not drink milk to ensure their personal calcium supply or to produce calcium-rich milk, the question is – why bother taking a cow’s milk to feed a human child?

Milk was already rich in calcium before computers were available, when farming allowed cows to eat grass, herbs, tree bark, and occasionally fruits, if they could. Those provided sufficient resources for the cow to produce calcium-rich milk for their calves.

“Cows have a different digestive system which allows them to extract calcium from grass but we humans cannot,” could come as a good argument. True, the cow’s digestive system allows it to process hard steppe grass and gathers minerals from it. However, note that calcium is present in all green plants (salads, spinach, chard, broccoli, green cabbages, wild plants, etc.)

Exactly these plants (and fresh seeds such as nuts) are the natural source of calcium for humans – not the baby food of a large ruminant.

If you’re a die-hard fan of consuming milk and thinking that its good for you, we’ll have you know that indeed, calcium can be deposited in the soft tissues: connective tissue, arteries, joints, brain.

This process is called “calcification” and begins right from the first sip, within your mouth. On the flipside, diseases and symptoms such as rheumatism, migraine and asthma are the additional consequences of lime and acid accumulation in the human organism, caused by milk consumption.

In fact, humans would not need so much calcium if we only reduced the calcium-destroying factors: meat, sugar, salt, coffee, white flour and other dairy products.

The less processed foods you consume, the less you risk suffering from mineral deficiencies and other side-effects.  So before you reach for calcium pills or even drink cow’s milk – which both do more harm than good – try going for raw green foods. 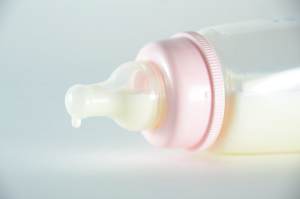 Furthermore, modern research has explained that until the age of about 30 years, calcium is incorporated into bones and teeth, after which the so-called “bone degradation” takes place gradually. Regardless of your daily calcium consumption.

Companies say that 1 glass of milk, 1 cup of yogurt and 1 piece of hard cheese consumed by students during exam sessions, have helped them study better.

Other brands dare say that the milk sugar  provides slowly usable energy and ensures a constant blood glucose level. Or that calcium also makes the nerves strong in addition to the bones.

Also, protein found in dairy is particularly important in stressful situations. And milk fat is the well-tolerated fat that saturates without burdening the stomach. Honestly, most of this information is not untrue but not the complete truth either.

A study comparison between pregnant African women and pregnant white women showed differences in favor of the Africans who consumed an average of 300 milligrams of vegetable calcium per day, while the white women received 800 milligrams of calcium mostly extracted from dairy products.

Upon examination of their bones, the results showed that white pregnant women experienced a dramatic calcium loss from the bones, while the African women still retained strong and healthy bones. In conclusion, milk cannot truly remedy calcium deficiency but can contribute to the process.

Is Cow Milk Good for Humans?

Let us set things straight once and for all – a cow’s milk exists for the sole purpose of feeding her own offspring and to ensure its growth, also containing the substances necessary for the development of a ruminant stomach, which is needed for growing a thick, safe coat.

A calf will use its mother’s milk to gain weight rapidly and thus, survive difficult conditions in nature.

A cow’s milk in no way contains substances needed to develop a normal, healthy human brain, much less to make it smarter. When you give your child cow’s milk, the developing brain gets the same nutrients a calf brain needs!

On a final note, let’s discuss the beliefs that cow’s milk can help diabetics.

Human breast milk contains 6.8% lactose, which is necessary for the development and performance of such a complex organ as the human brain. The cow’s milk, however, contains only 3.8%, which is quite sufficient for a cow’s brain.