Diabetes impacts millions of individuals worldwide, making it among the most prevalent chronic conditions in healthcare. While different types of diabetes exist, all variations of the disease involve abnormally high blood sugar levels. The pancreas–a vital organ of both the human digestive system and endocrine system–often plays a vital role in the origination and progression of the disease.

One of the many primary functions of the pancreas involves the production of insulin: This hormone helps decrease the amount of glucose (or blood sugar) that circulates in the blood.  Also, the pancreas also can increase blood sugar amounts via cells that produce glucose-boosting glucagon. Therefore, if the body hinders insulin production in any way, blood sugar levels can become uncontrolled, and diabetes could develop.

For Type I Diabetes Mellitus, also sometimes referenced as juvenile diabetes, the pancreas itself fails to produce an appropriate amount of insulin. In this type, the body’s immune system will launch an assault on pancreatic cells responsible for producing insulin. Type 2 Diabetes, which tends to develop later in a person’s life, can also be caused in part from faulty insulin production, although unrelated factors are more likely to be at play in this condition.

Eventually, though, chronic Type 2 Diabetes can essentially destroy cells in the pancreas that produce insulin. Therefore, the negative connection between this form of the condition and the pancreas still remains strong. 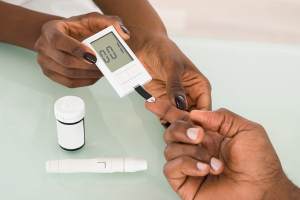 The relationship between the pancreas and diabetes can be of a detrimentally cyclical nature.

Individuals with diabetes have demonstrated an increased risk of some dangerous pancreatic conditions, such as inflammation of the organ known as pancreatitis. Diabetics who have presented with symptoms of the disease for five-plus years also tend to have higher rates of pancreatic cancer. Experts are still uncertain, however, whether diabetes contributes to the development of these conditions or whether the diabetes is, in fact, a side effect of a preexisting pancreatic condition.

What remains clearer is the negative effect diabetes, especially untreated diabetes, can exert on surrounding organs. Several key organs surround the pancreas, and each of these organs can suffer negative consequences from unrestrained blood sugar. Changes in the stomach and the overall digestive system, for example, can cause increased hunger, weight loss, and nausea or abdominal pain.

The inability to filter glucose may also lead to increased waste in the kidneys, which can damage the functioning of these organs while concurrently bolstering the need to urinate. Breathing and cognitive deficits are another possible consequence. And either extremely high or extremely low levels of blood sugar can take a devastating toll on the circulatory system, increasing the risk for heart attacks or other cardiac issues.

The effects of diabetes can even be detected in areas of the body seemingly far removed from the pancreas. The absorption of glucose in the eye can contribute to structural changes and eventually visual deficiencies.  Blood vessel and nerve damage in the extremities, on the other hand, can cause numbness and, in extreme cases, amputation.

While diabetes cannot be cured, with a proper diagnosis and appropriate treatment, this condition can be managed.  If an individual experiences some of the common diabetic symptoms like weight loss, heightened hunger and thirst, or frequent urination, a diagnostic test for diabetes should be considered.

This is especially true if the individual is in a high-risk group, including those with a family history, those who are obese, and those who smoke. For a test, clinical professionals will evaluate glucose levels and determine if prediabetes (a heightened but not overly excessive blood sugar level) or diabetes is present. Individuals diagnosed with diabetes will then typically begin a treatment plan that will likely include dietary recommendations, exercise, and medication that helps control blood sugar levels.

If it is determined that the pancreas is not producing enough insulin, patients will often be required to take daily insulin injections. These injections help regulate blood sugar levels., but they must be carefully monitored.

If a patient takes a shot of insulin without taking in some food as well, then the insulin can sink blood sugar to dangerous levels. Uncontrolled shaking, profuse sweating, mental confusion,  eventual unconsciousness, and even death can result. Diagnosed diabetics will need to keep a regular check on their blood sugar levels to ensure they stay as close to the normal level of 100 as possible. Levels that soar into the upper hundreds can facilitate serious long-term complications.

Complications–this word is perhaps the perfect summation for diabetes: the medical equivalent of a good relationship gone wrong.