How Effective Are Whooping Cough Vaccines?

When you get vaccinated for whooping cough, the vaccine isn’t 100 percent effective. Some people who have been vaccinated catch the disease anyway. Whooping cough, also known as pertussis, can be deadly, especially for people with a weakened immune system, young children, and the elderly. Knowing your actual risk helps you avoid catching the disease unexpectedly.

The vaccine given to babies for protection against whooping cough is the DTaP vaccine.

This particular immunization is part of the standard vaccination schedule for children, and it actually includes vaccines against a few different diseases.

Diptheria and tetanus are the two other diseases this vaccine helps prevent. DTaP is given in five doses over a few years, starting at about two months of age and ending at around age five.

Children who receive the full series of DTaP immunizations have a high rate of protection against pertussis, but the effectiveness decreases over time.

The first few doses offer limited protection against whooping cough, but by the third dose, about 80 to 85 percent of kids getting the vaccine series are fully protected. About 98 percent of children are completely protected from whooping cough for one full year after the last dose of DTaP.

Over the next five years, the whooping cough vaccine becomes slightly less effective. By age 10, five years after the last dose, about 70 percent of kids who had the DTaP vaccine series are still protected.

The other 30 percent generally have partial protection, which means they might catch whooping cough if exposed to it, but the symptoms will likely be mild instead of severe.

Because the whooping cough vaccine loses effectiveness over time, booster shots are necessary. Most children get a whooping cough booster vaccination at around age 11 or 12.

Adults and adolescents get a different vaccine against whooping cough than infants do. The vaccine used to protect older children and adults is Tdap. After getting a Tdap shot, about 70 percent of people are fully protected against pertussis, and this gradually decreases to 30 percent protection 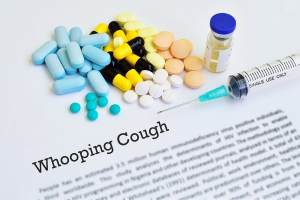 over the next four years.

Doctors and scientists used to recommend a Tdap booster every 10 years, but for effective protection, you might need to get a booster more frequently. Boosters are especially important for small children, people who will be spending a lot of time around infants, and immunocompromised people who are not vaccinated.

Pregnant women experience the same vaccine effectiveness as other adults. Some degree of protection passes to the baby as well when a pregnant woman gets the Tdap vaccine.

A single immunization during a first pregnancy won’t protect a second or third child.

Even Less Effective Protection Against Pertussis Is Worthwhile

While a 30 percent rate of protection four years after immunization might not seem like good odds for avoiding whooping cough, it’s still worth it to get the vaccine. The 70 percent of immunized people who don’t have full protection after four years still have some level of protection.

Obviously, getting vaccinated for pertussis is better than not getting the vaccine, but relying on immunization to provide complete protection isn’t wise. Take precautions to minimize exposure to whooping cough even if you’ve been vaccinated and help prevent the spread of this deadly infection.