Mole or Melanoma? Know the Difference

Your skin can tell a very visible story about your health, but it’s often a confusing message that it delivers. Rashes, pimples, and acne can all be caused by daily lifestyle issues, but sometimes skin blemishes can be a symptom of something far more serious and the warning signs shouldn’t be ignored.

Skin cancer is by some distance the most common form of cancer, making up around half of all cases of the disease. Melanoma, even though it’s probably the most widely known type of skin cancer, is in fact very rare, accounting for only around 1% of all skin cancers.

However, it can be highly aggressive, and it’s the form with the highest mortality rates if caught late. The good news is that it can also be extremely treatable – with an early diagnosis, the five-year survival rate is over 98% after a simple surgical procedure. But what should you be looking for to spot a melanoma soon enough for successful treatment? 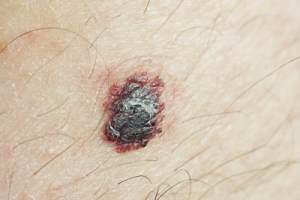 The first thing to note is that most skin blemishes are harmless moles, which are benign and pose no threat to your health. While you may wish to have moles removed for cosmetic reasons, they won’t grow much beyond their initial size and don’t require treatment.

However, you need to make sure it is indeed only a mole, and a handy way of telling whether you have a mole or a melanoma is to look for five characteristics starting with the letters A, B, C, D, and E.

Added to this, any mole or mark which feels sore, develops a crust, bleeds, or oozes discharge should be checked out by your doctor.

Where Do Melanomas Occur?

Most skin cancers are caused by overexposure to sunlight, but cases are not always limited to areas of previous sunburn. They can occur anywhere on your body, including on the inside of your mouth, although they are most common on the face, back, arms, and legs.

Melanoma affects over 100,000 people each year in the US alone and kills around one in ten sufferers. However, if you know the signs to look for, then the prospects for early and successful treatment are excellent.