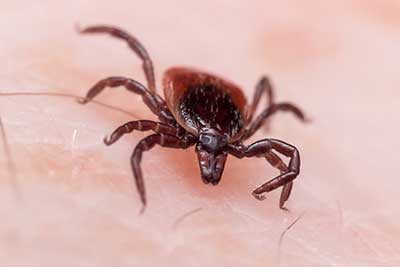 1958; it is still primarily found in Canada, as well as the United States Great Lakes and northeastern states.  The virus is found in small rodents, transmitted to any of six species of ticks which feed on the rodents and then to humans who are bitten by ticks.  The virus is not transmitted from person to person.  While transmission of Lyme disease may take up to 48 hours after a tick attaches, experts think that Powassan virus transmission could occur within less than 12 hours.

Powassan virus infections are rare; on average, about seven people per year are diagnosed.  The number of infections may be underreported since many people show no symptoms of the disease.  If symptoms do occur, they could appear as soon as a week or as late as a month after the tick bite.  Tests of blood or the fluid surrounding the spinal cord are used to confirm the infection.

The severity of symptoms varies.  Because the virus infects the central nervous system, symptoms can be serious, leading to brain inflammation (encephalitis) and inflammation of the membranes which surround the brain and spinal cord (meningitis).

Like many diseases transmitted by ticks, Powassan virus can cause permanent health effects.  According to the Centers for Disease Control, roughly 50 percent of those who contract the disease continues to have headaches and memory problems.  In 10 percent of Powassan virus cases, encephalitis leads to death.

Unfortunately, there is no treatment for Powassan virus infections.

People with severe symptoms may need to be:

Because of the severity of the disease and the lack of treatment options, avoiding infection is key, and this means avoiding tick bites.

Powassan virus is still relatively rare, so there is no need to panic after a tick bite, especially if you do not live in an area where the virus has been found.  However, because of the potential severity of the symptoms, and because of the wide variety of other tick-borne diseases, it is important to take preventative measures to keep ticks from biting in the first place.

Lime Disease Risk for Your Pets

Spinal Injuries Not to Ignore