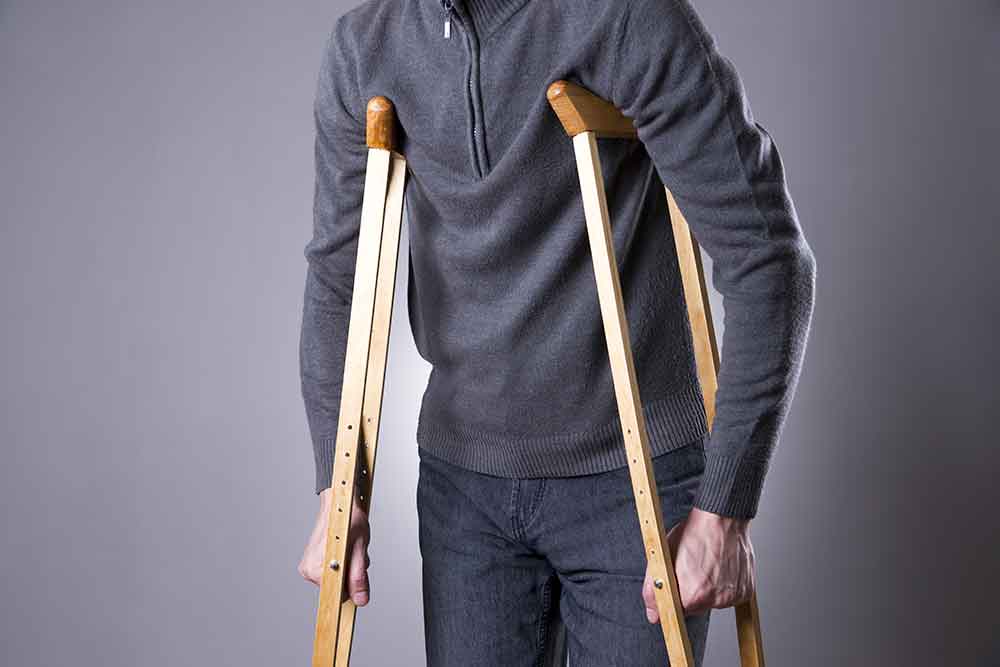 There are many different types of crutches but they all serve a similar function. When used properly, crutches can:

If you think you are having an emergency that would require crutches, visit SignatureCare Emergency Center at any of our locations.

– Underarm crutches are one of the most common types. These are the types of crutches that many people are most familiar with. They are made of a solid weight-bearing shaft that splits into a V-shaped frame, ending in a padded support bar. The support pad goes under the arm while the patient grips a handle in the middle of the frame. To use these crutches, the patient moves one or two crutches together for support while moving the uninjured limb forward to take a step. This allows freedom of movement without the need for using the injured limb.

– Leg support crutches are somewhat less common than other types. They are typically used for injuries affecting only the lower leg. They consist of a brace that focuses the weight of the body on a patient’s upper leg. This prevents pain and further injury to the lower leg. These are not used for most serious leg injuries and may only be recommended for minor injuries to the lower leg. However, they are easy to use because they do not require the use of the hands or arms.

How To Use Crutches

It may take some time to adjust to using crutches properly. During this time, it’s important to move slowly and carefully. Overexertion may lead to fatigue, strain or additional injuries.

Also, using crutches can be very tiring. It’s important to rest frequently and stay hydrated. Over time, patients will adjust to this new type of movement.

Where to Get Crutches

When a doctor instructs a patient to use crutches, they may provide the crutches in the office or they may direct a patient to a medical supply store. Patients should make sure to ask their doctor for plenty of information when they are getting their new crutches. The employees at the medical supply store can also provide helpful information and advice.

When patients find the right set of crutches and learn to use them properly, they can quickly be on the way to a safe and healthy recovery.

When someone suffers an injury that reduces their mobility, crutches can be a great solution. Injuries to the legs, hips, and back can be extremely painful and they can reduce or eliminate a person’s ability to walk without pain or discomfort. Trying to walk on an injured leg may cause the healing process to take longer and it may even cause additional injuries. Using crutches properly under a doctor’s supervision is the best way to ensure that the healing process is quick and effective. Schedule an emergency room appointment with us.